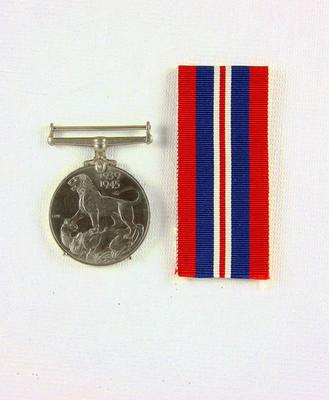 Description
The War Medal 1939-1945. Silver. On the obverse of this medal is the effigy of King George VI. On the reverse is a triumphant lion trampling on a dragon symbolising the Axis powers. The ribbon is the red, white, and blue of the (British) Union Flag. There is a narrow central red stripe with a narrow white stripe on either side. There are broad red stripes at either edge, the two intervening stripes being blue.

This medal was issued to J. Belcher.