Description
Circular bronze plaque. Features an image of Britannia holding a trident and standing with a lion. The designer's initials, E.CR.P., appear above the front paw. In her outstretched left hand Britannia holds an olive wreath above the rectangular tablet bearing the name John William Cowan cast in raised letters. Below the name tablet, to the right of the lion, is an oak spray with acorns. Two dolphins swim around Britannia, symbolizing Britain's sea power, and at the bottom a second lion is tearing apart the German eagle. Around the picture the legend reads (in capitals) "He died for freedom and honour". The reverse is blank.

Originally on display at Early Settlers Association with portrait of John Cowan, Victory Medal, and printed note from King George V that was sent with the memorial plaque. 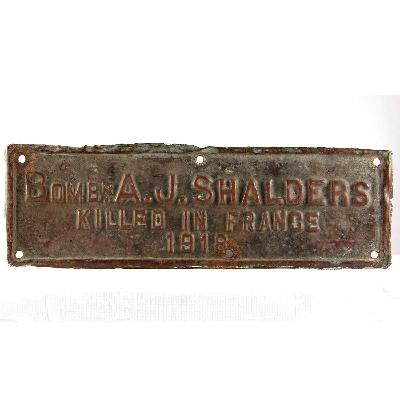