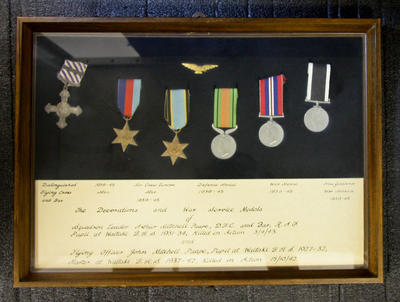 The Distinguished Flying Cross is a cross flory. The horizontal and bottom bars are terminated with bumps, the upper bar with a rose. The decoration's face features aeroplane propellers, superimposed on the vertical arms of the cross, and wings on the horizontal arms. In the centre is a laurel wreath around the RAF monogram, surmounted by a heraldic Imperial Crown. The reverse is plain, except for a central roundel bearing the reigning monarch's cypher. The suspender is straight and decorated with laurel wreaths.The ribbon bar denoting a further award is silver, with the Royal Air Force eagle in its centre. Bars awarded during World War II have the year of award engraved on the reverse. The ribbon is white with purple broad diagonal stripes.

This bronze six-pointed star has a circular centre with the GRI/VI monogram, surmounted by the Royal crown, and inscribed 'THE AIR CREW EUROPE STAR'. The ribbon has black band and a yellow band, repeated in reverse order and separated by a blue band. The colours and layout symbolise the continuous service of the Royal Air Force by night and day. The sky is represented by the blue centre band and night flying by the black bands on the edges, while the yellow bands represent enemy searchlights.

The Defence Medal has a non-swivelling straight bar suspender attached to the medal with a single-toe claw mount and a pin through the upper edge of the medal. The British issue medals were struck in cupro-nickel. The obverse shows the bareheaded effigy of King George VI, facing left. Around the perimeter is the legend "GEORGIUS VI D:G:BR:OMN:REX F:D:IND:IMP." The reverse shows the Royal Crown resting on an oak sapling, flanked by a lion and a lioness above stylised waves. At the top left is the year "1939" and at the top right the year "1945". The exergue has the words "THE DEFENCE MEDAL" in two lines. The ribbon has a green band, a black band and another green band, repeated and separated by orange band. The flame-coloured orange centre band and the green bands symbolise enemy attacks on Britain's green and pleasant land while the narrow black bands represent the black-outs against air attacks.

The War Medal 1939-1945. Silver. On the obverse of this medal is the effigy of King George VI. On the reverse is a triumphant lion trampling on a dragon symbolising the Axis powers. The ribbon is the red, white, and blue of the (British) Union Flag. There is a narrow central red stripe with a narrow white stripe on either side. There are broad red stripes at either edge, the two intervening stripes being blue.

The New Zealand War Service Medal. Silver. The obverse shows the uncrowned effigy of King George VI, facing left, with the legend "GEORGIUS VI D:G:BR:OMN:REX F:D:IND:IMP." The reverse has the inscription "FOR SERVICE TO NEW ZEALAND 1939-1945" above a fern leaf. Ribbon black with white edges.