A = Scabbard. Leather covered. Strap is broken, but has been stapled together. End of scabbard is unstitched and worn.

B = Sword has been renickled. Has Empire crown and VR in scrolled area of hand piece.

Cecil Harry Street was born in England in 1871. In 1887 his family moved to Australia, in 1895 he came to New Zealand. Sometime after 1895 Harry became manager of the Ngapara Dairy factory. In 1900 he enlisted in the Boer War. After discharge he returned to Oamaru, where he became a commissioned officer in the Waitaki Mounted Rifles, having the rank of Lieutenant. He enlisted in 1902 and was in South Africa when peace was declared. [He served in the Boer War from 1899 to 1902 and the sword was part of his military regalia - Oamaru mail 15-11-2004 p. 3] 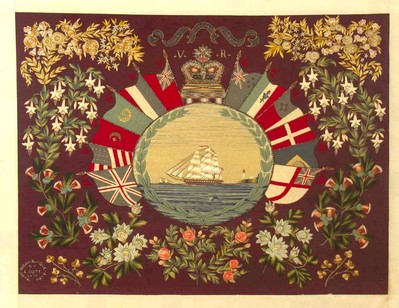