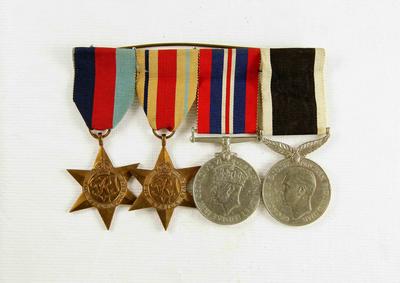 The War Medal 1939-1945. Silver. On the obverse of this medal is the effigy of King George VI. On the reverse is a triumphant lion trampling on a dragon symbolising the Axis powers. The ribbon is the red, white, and blue of the (British) Union Flag. There is a narrow central red stripe with a narrow white stripe on either side. There are broad red stripes at either edge, the two intervening stripes being blue.

The New Zealand War Service Medal. Silver. The obverse shows the uncrowned effigy of King George VI, facing left, with the legend "GEORGIUS VI D:G:BR:OMN:REX F:D:IND:IMP." The reverse has the inscription "FOR SERVICE TO NEW ZEALAND 1939-1945" above a fern leaf. Ribbon black with white edges.