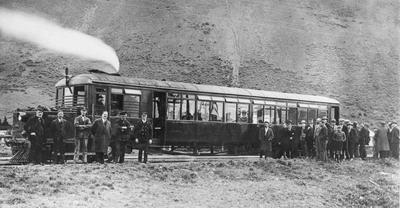 Description
Clayton steam railcar. This unusual-looking machine is the Clayton steam railcar which began a regular passenger service between Oamaru and Kurow on Wednesday 4 August 1926. The photograph was taken at Kurow during the trial run on Sunday 1 August, 1926. The railcar left Oamaru at 10.30am, and after an uneventful run reached Kurow at 12.15pm. The official party on this trial included a number of high-ranking railway officers and government officials including Sir Joseph Ward. The railcar was withdrawn from service on Saturday 10 November 1928 and was replaced by an ordinary steam service. An impending overhaul and increasing passenger traffic created by the hydro construction made the changeover necessary.