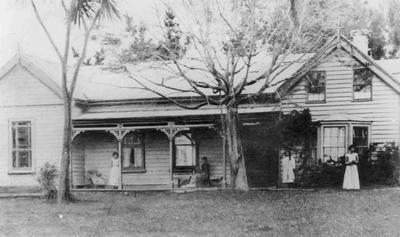 Description
The old home - Stotfold Station, near Oamaru. Christmas 1936.
Caption reads: "The centre portion of the house was built in 1856 and occupied by Mr and Mrs Thomas Ferens in 1857. The room on the south side of the original home was built in 1862 and used as the school room for many years. Three governesses, Misses Kate Kennard, Goldie and Mrs Lee (nee Swift of Melbourne) later married W F Kinnear
of Oamaru. The new wing of two storeys was built in 1865 by W B Scandrett, carpenter, and the chimney by Robert Meek, stonemason. Mr Scandrett later became town clerk of Invercargill and afterwards mayor for several years. Mr Robert Meek later was a farmer in the Waiareka Valley. He sold out in the 1880s and bought a large farm at Fairfax. He also erected limestone works and did general farming. He died there.