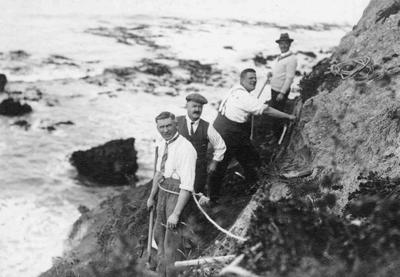 Description
Construction of Marine Parade, Cape Wanbrow, c. 1930. " Cape Wanbrow itself offered a seafront of a much more dramatic character, hidden because of its inaccessibility. In 1929 a group of citizens led by W G Grave [Oamaru solicitor and explorer] began the work of constructing a track around the cliffs; later unemployed labour became available to complete the task. Grave died before it was finished, but when in 1935 the track was opened a tablet to his memory was unveiled at the entrance."