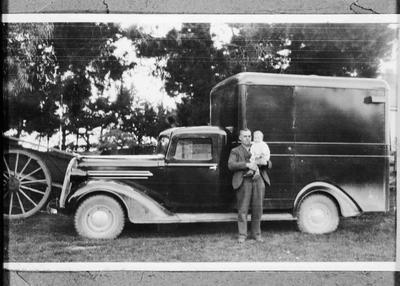 Description
George Cook and 1936 Dodge truck used to transport the Kalee portable film projector to North Otago and neighbouring areas. The projector travelled as far south as Hampden, west to Tokarahi and north to Makihikihi. The truck would be backed up to the door or window of the hall and the film projected onto the screen. This fortnightly movie show was one of the social highlights for the country people of the period. The circuit, originally operated by George Cook (pictured), was taken over in 1946 by Ewart Livingstone who worked it until television's influence in the 1960s made it unprofitable.